Being aware of potential pests for your trees is important. This newly planted hemlock is healthy now, but without vigilance could be susceptible to hemlock woolly adelgid

For every tree, there is a pest that attacks it. Unfortunately, Hemlock trees are not immune to that fact. The accidental introduction of the hemlock woolly adelgid (HWA) from Japan in the 1950s, was a curse for Eastern Hemlocks, but to date not a major invasive in Ontario. They are a major threat though, and as such it is important to be aware of and recognize this invasive insect if you come across it. 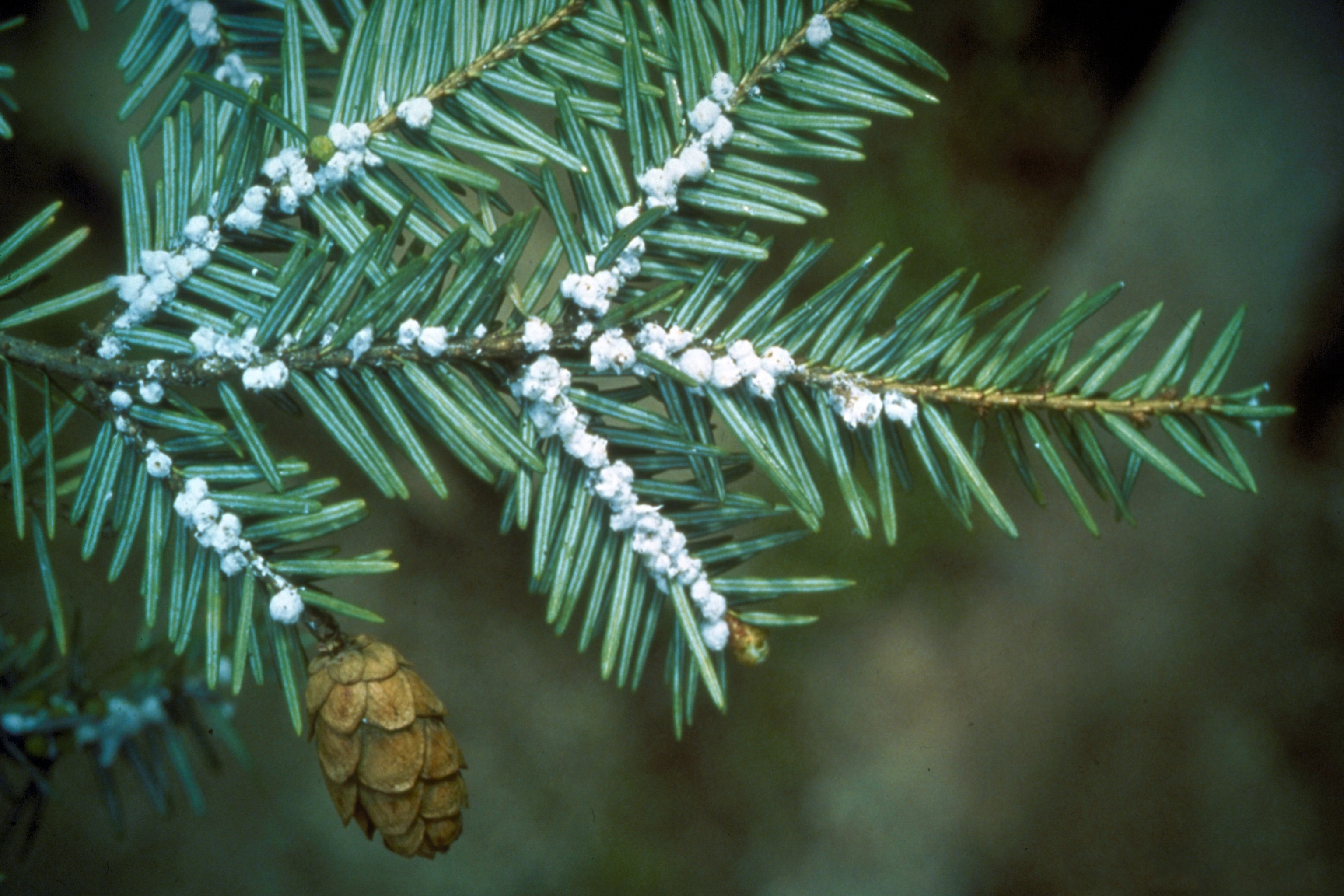 Hemlock Woolly Adelgid is an invasive insect with the power to decimate hemlock trees. While it is not recognized as being in Ontario at present, HWA was found in Etobicoke in 2012 and Niagara Falls in 2013. Both outbreaks were quickly controlled, but a HWA presence south of the border puts Ontario’s hemlock trees into a high-risk category.

What to look for—white woolly sacks at the base of needles.

The hemlock woolly adelgid goes through several stages. The aphid-like insects start as woolly eggs and go through up to four nymph stages (instars), before becoming adults (sistens, progrediens, and sexuparae). Instars start as crawlers which feed on the tree. Through each instar, they get a little bigger (from 0.44 mm to 0.74 mm), until becoming adults. In the adult phase, sistens are 1.41 mm long and 1.05 mm wide with a waxy, wool coating. Progrediens are 0.87 mm long and 0.63 mm wide. Sexuparae are 1.09 mm long and 0.51 mm wide, dark brown in colour, with long antennae and wings. The sistentes overwinter on the host tree (present from June until following March). Progredientes are present on the tree from March until June. Once the sexuparae mature, they fly to spruce trees to lay eggs. Without fertilization, they fail to successfully develop and hence leave the spruce tree unharmed.

So why are these tiny insects a problem? As they feed on the hemlock tree, they effectively cut off nutrients. Each new generation of hemlock woolly adelgid further attacks new growth on the hemlock, depleting any stored nutrients. Typically a tree will show signs of chlorosis (yellowing of foliage), loss of needles and twigs, and a decrease in new foliage. Most trees will succumb to an infestation within four to ten years, with older trees and trees already under stress are more susceptible.

How Do Hemlock Woolly Adelgid Spread?

A big culprit for many insect infestations are our own fault. Humans are often the worst for spreading insects through the moving of wood products. In the case of hemlock woolly adelgid, the insect also spreads via birds, the wind, rain, and other forest animals. Crawlers spread locally (anywhere from a few centimetres to 8 km) during high wind and heavy rain, but easily transportable and sticky ovisacs can hasten the spread much further via birds, mammals, and people.

What Can You Do to Prevent and Protect Your Hemlocks?

Your best defence against the hemlock woolly adelgid is prevention.

With vigilance, the accidental spread of hemlock woolly adelgid can be reduced. At present, Canada’s response to HWA is with mechanical control—infected trees in the two Ontario infestations were cut down. In the US, chemical methods, like insecticidal soaps and TreeAzin injections, are implemented. Biological control methods are also used, with the introduction of adelgid eating beetles and flies. Canadian officials are closely observing the success of these control methods, distinctly aware of the risk that HWA may move into Ontario again. Hopefully the spread can be contained and dismantled, but until then it is important that we are all vigilant against this invasive attack.